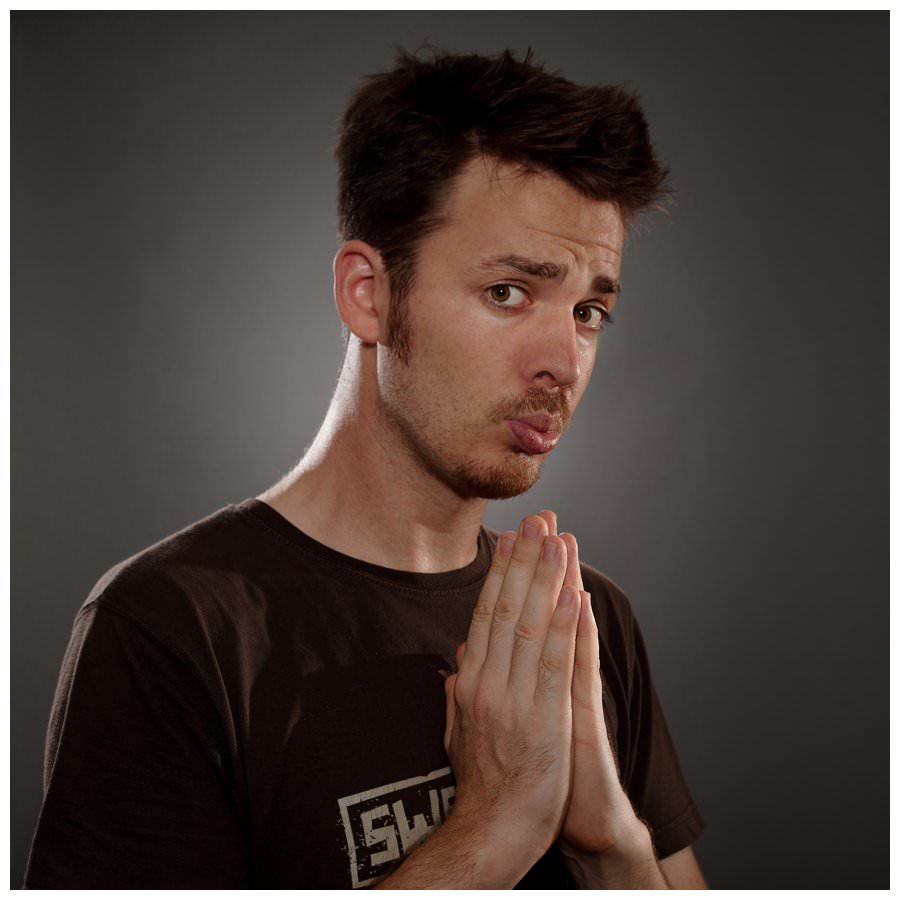 It was Aaron Nace’s Watcom Tablet Giveaway promotion that inspired me to make this.  I thought it would be cool to reply to his promotion with a near mirror image of myself begging for the tablet.  Furthermore, his portrait was cool.  It was beautifully lit and tack sharp.  So I checked my clock and gave myself a generous hour to reverse engineer the shot figuring I could learn a think or two from one of the masters in the process.  Below I’ll share what I learned sweating in out in my 30 degree office over two-and-a-half-hours. 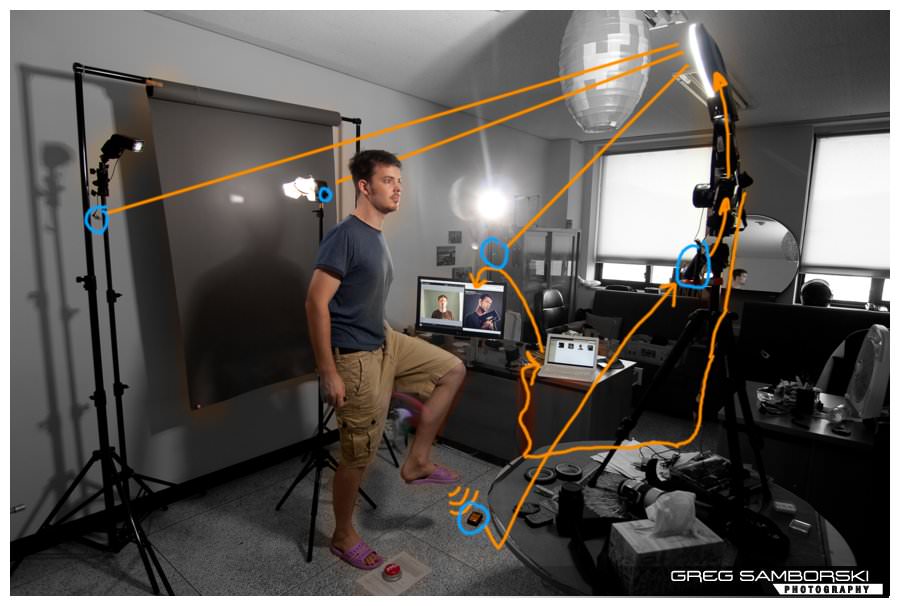 Let’s go Tethered
Being this was a self portrait, something I have considerable experience with, I didn’t want to waste a bunch of time waking around to look at the back of my camera.  So I tethered my 5D Mark II in Lightroom and setup a new folder.  Tethered shooting is always my first choice when possible, and almost essential for self portraits.  Also, I had my monitor setup on my cool new swivel arm so I wanted to have the original image on screen right next to where my images would be popping up. 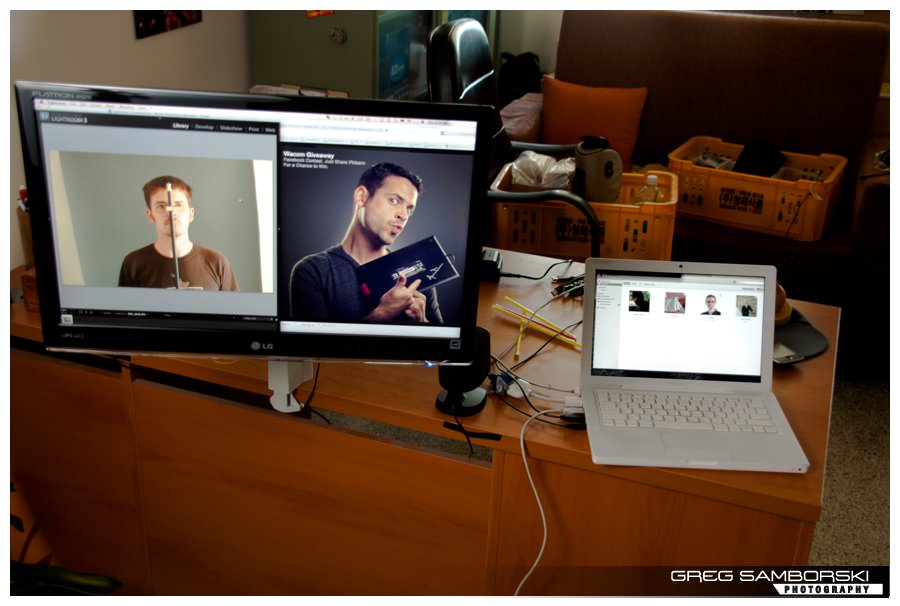 Back Drop
Aaron chose the one backdrop I’ve got, and the only one you really need, a gray one.  I’m a thrifty man though and prefer to keep my brand new gray seamless pristine standing vertically in it’s original box.  I cut a strip off when I first got it.  It’s far too thin and yet I always stress myself out needlessly trying to make it work, photoshopping in excess… don’t ask me why. 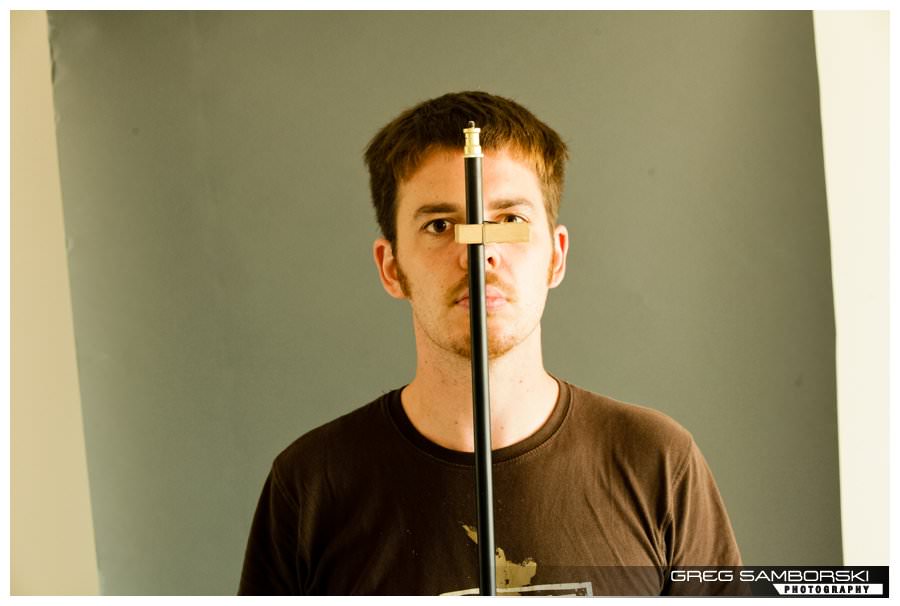 Composition – Stand In Light Stand
A little thing I learned taking self portraits every day for a year was that you need a stand.  Without one you’re just wasting time.  My good buddy Mr. Light Stan is always around and up for the job.  I extend him to my height and then attach clip where my eyes are.  I then lock in my focus on the clip, where my eyes would roughly be.  With my stand-in in place I can set up a rough composition.

I tried almost every lens in my bag (all three of them, lol) and opted for the 50mm 1.8 prime.  I find reverse engineering composition to be one of the most difficult aspects of copying a photo.  Probably because there are so many variables, focal length, distance to camera, aperture, camera level and angle.  I spent a while trying to figure it all out.  In the end I went with the camera straight on, slightly lower than eye level.  I’d really like to know what Aaron actually did.

Once it’s time for Mr. Light Stan to leave I put a piece of paper on the ground marking where I should stand, the Easy Button was a paper weight. 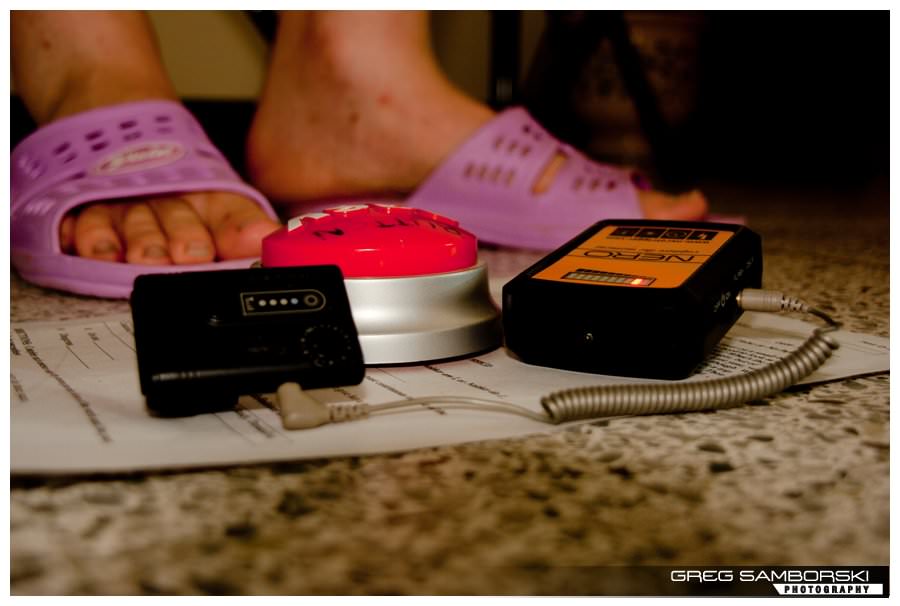 Remote Shooting
Seeing as I’m in the picture I need some way to trigger the camera.  Rather than hitting the timer and running into my shots I opt for the Phottix Plato remote trigger.  I can now strike a pose, fire the camera via remote, check the shots right from where I am standing on the monitor and make adjustments as needed.

(Shortly into my shoot I realized I needed to be hands free.  In this case I had two options, use the 2 second count down option on my remote or trigger the camera a different way.  I decided to use my Nero Trigger which can be triggered by light, laser and sound.  I set the sound trigger up next to the camera and would stomp my foot to take the picture.  But there were problems, often the sound of the shutter itself would trigger the trigger setting it into an infinite loop so I moved the trigger away from the camera. 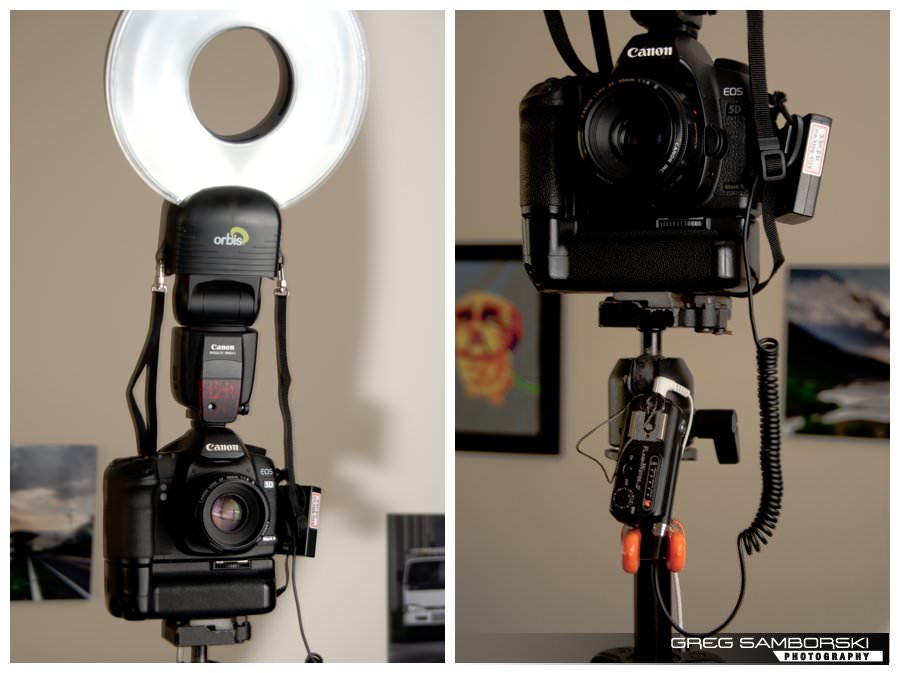 Ring Light
I could see by the reflection in Aaron’s eyes he was using a ring light.  I just so happened to have purchased my own Orbis Ring Flash a few months ago.  The reflection looked high and slightly left, I decided to mount my Canon 580EX II on camera and slide the Orbis over top.  This flash would be triggered by the camera’s hot shoe.  I set it to 1/2 power as the ring light eats up more light than you would think.

Left Rim Light
My Nikon SB28 was put to use here.  I placed it about a meter behind me, slightly to my right so it would graze my neck and shoulder.  I was really aiming to get that dark shadow between the neck and jaw like in the original.  Bare flash was too harsh so I threw on a DIY back straw grid spot and went with 1/64 power.  This flash was triggered via an optical slave, when it sees a burst of light from the ring flash or any other flash it goes off. 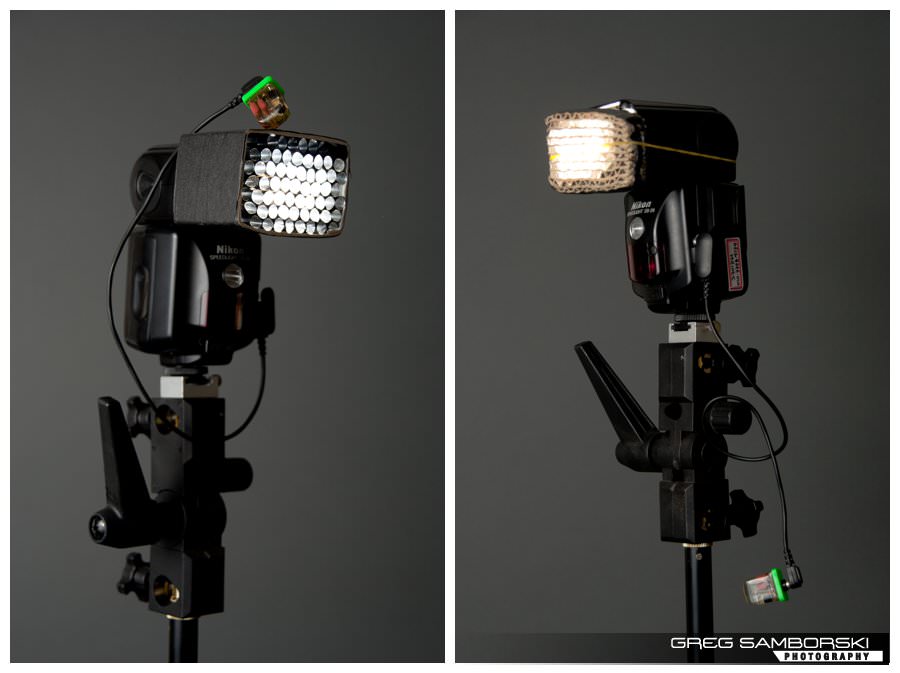 Right Rim Light
Another Nikon SB28 was employed as the right rim light.  I only had the one back straw grid so I went with an older DIY cardboard grid spot I had kicking around.  This light was also triggered via an optical slave. 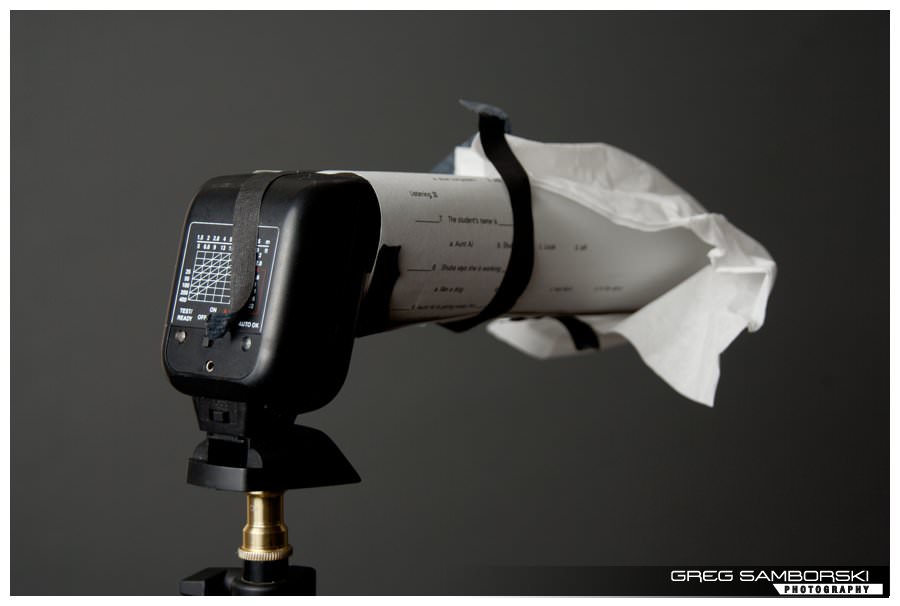 Back Ground / Separation Light.
By this time I was running out of everything, lights, stands and triggers.  I resorted to my cheep-o Sunpack DS-20  which has a built in optical slave.  The hard thing about this light is that you have no control over the power output on the slave setting.  Bare the light was too hash and spread out.  I fashioned this snoot out of an old student exam and managed to control the area of light but it was still too bright.  To I used a highly sophisticated tool to diffuse and soften it a little, Kleenex.  Some people claim you should only use OEM Sunpack tissues, I’m quite fine with aftermarket.

Striking the Pose
This was the second hardest part.  I tried an tried and even in the end, I never nailed the head tilt, turn or lips.  I usually had multiple chins and zero jaw line.  This may not be so much a posing problem as it is a fitness problem.  Oh, and my parents didn’t give me much of a jawline to begin with for that matter… thanks mom and dad.

Sounds easy enough?  Not when this s*it starts happening!!!

5D Mark II Fails to Tether to Lightroom
It worked fine for my first thirty shots, then all I got was a busy signal from my camera.  I tried quitting Lightroom, turning off my camera, unplugging cables, taking the batteries out of my camera, rebooting the computer, nothing worked.  In fact, a day later and my camera still wont tether.  So every shot I stopped, walked to the back of my camera, checked the image, went back, posed again and repeat.  This was a HUGE annoyance.

Final Thoughts
Shooting engagements had led me to shoot a lot more natural light these days.  I miss the days of playing around with lighting setups.  I was pretty happy with my photo, but when I saw it side by side with Aaron’s I realized I have a long way to go.  My lighting is way off.  Nonetheless, I learned a lot.