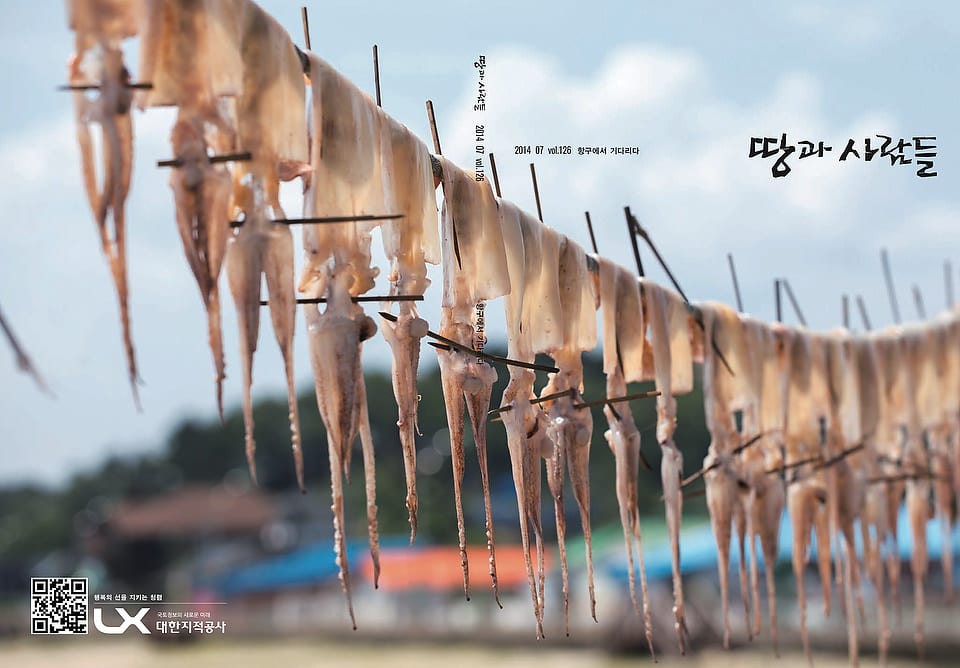 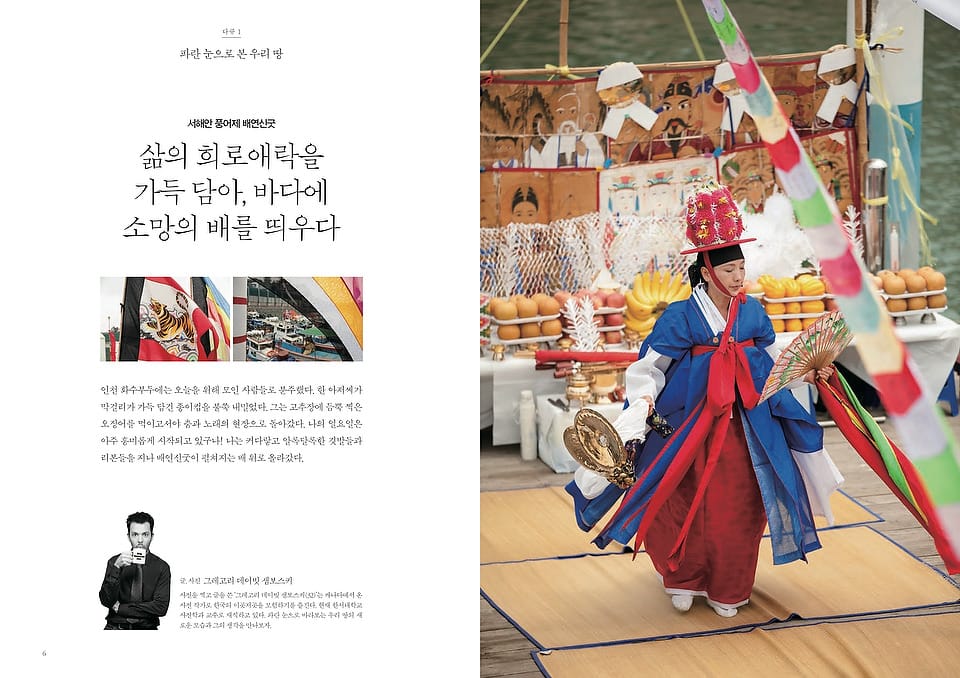 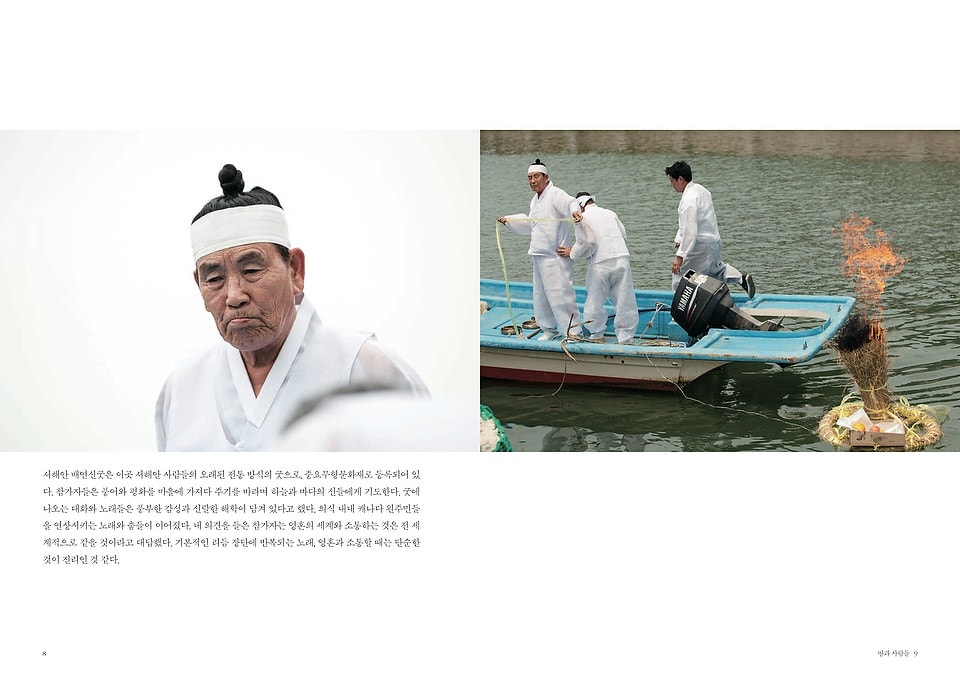 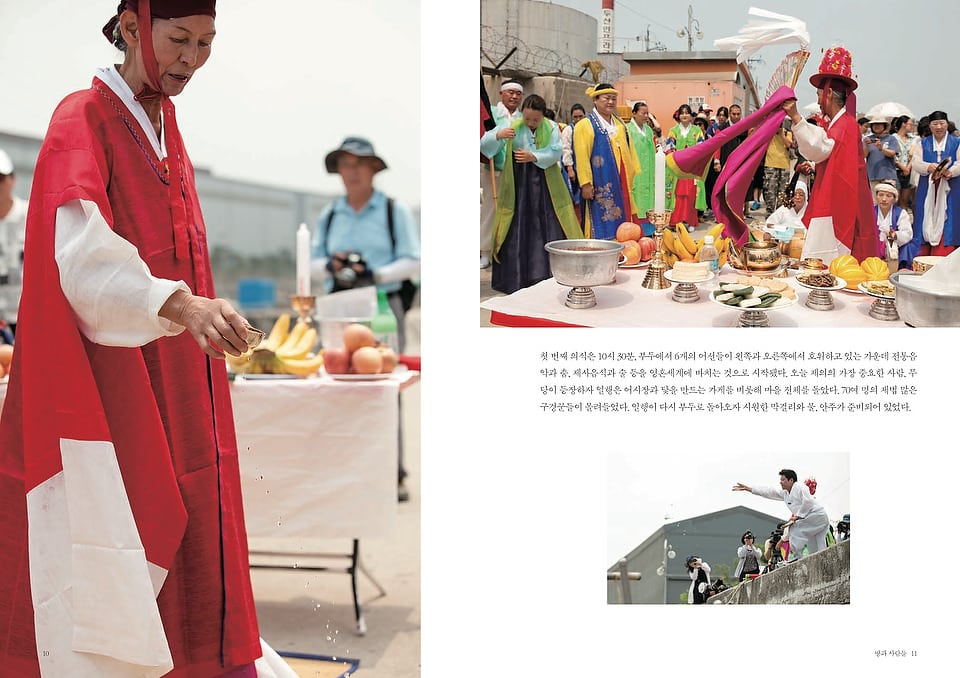 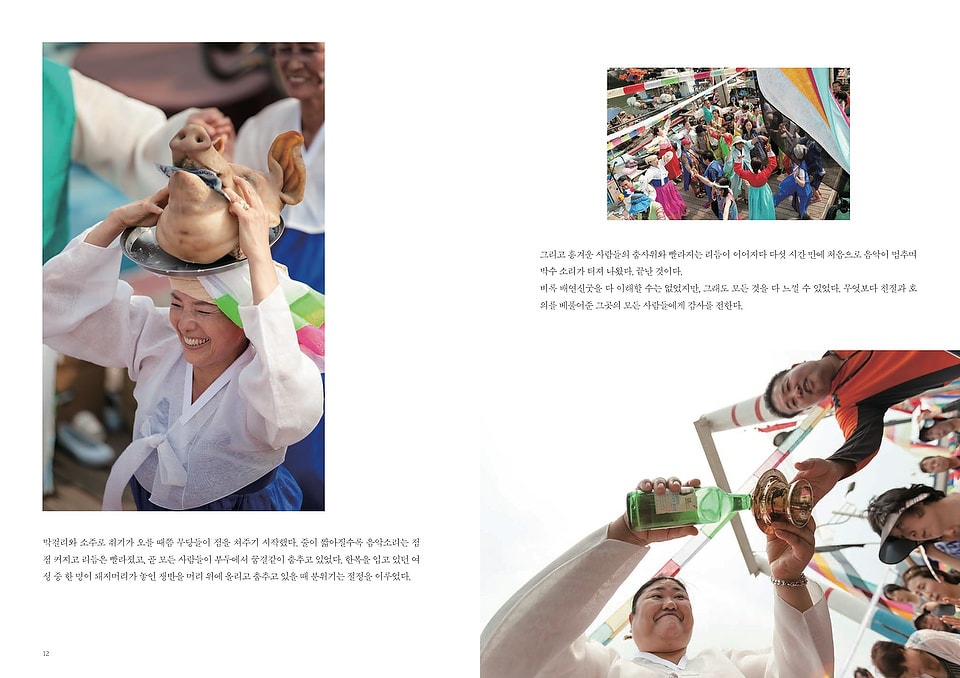 The loudest ahjussi seated at the red plastic table next to the pier extended a paper cup overflowing with makgeolli to me with a shaky hand. He spoke in the kind of abrupt, booming voice you would associate with anger but his eyes and his offering belied kindness. Every time he yelled something at me a hand smacked him across the bicep. The big ajumma hitting him held an ultra thin cigarette between her thick leathery fingers. She yelled something at him and gave me the universal “sorry he’s a little drunk” look. When the second shot of soju followed right behind the first I did my best to politely refuse explaining that I was here on a job to take pictures. Reluctantly, they let me leave but not before feeding me a few tentacles of a still squirming squid dipped in hot sauce. As I left my new friends burst back into song and dance. I checked the clock on my camera — 9:37am, my Sunday was off to an interesting start!

The “Seohaean Baeyeonsingut & Daedonggut” is an ancient shamanistic exorcism ritual performed by Korea’s west-coast maritime people. It’s listed as 82-2 of South Korea’s Important Intangible Cultural Properties. Participants pray to the gods of the heavens and the oceans asking for abundant catches and peace in their village. Getting there without a car takes some effort, in my case a bus ride, three subway transfers and a taxi. Hwasu-dong, the festival location, is situated next to a small inlet in Incheon. Deep inside the industrial zone lies this tiny finishing village almost completely overshadowed by the surrounding factories. There are no rocks, there is no sand, not even dirt in the area, just a long corridor of water lined with bleak grey industry all the way to the ocean. Yet after your eyes have adjusted to the concrete landscape you can spot the tell tale signs of a fishing village buried in the urban landscape. Stacks of nets are piled along the road along with huge Styrofoam floats resembling giant gel pills. Piles upon piles of foam coolers for transporting the sea food are strapped together and stuffed into every free nook and cranny. There are no 7-11s or GS25s, just a few locally owned markets with tables out front. Their prices even reflect the old feel of the village and its people, just 1,000w for a 1.5 litre bottle of water! How different this place must have been just twenty years ago.

At the heart of the fishing area lies a relatively new looking fish market and pier. Looking down the steep wooden ramp to the pier people were buzzing about preparing for the day’s festivities. I walked down under the large colorful flags and ribbons to the main area. Some folks worked on building a shrine of edibles while others changed into costume. A few spectators were already gathered, sitting under the plastic scrim shade of a fishing boat tied to the left side of the pier. It is here I met Grace, a very down to earth traditional Korean painter with a degree in English literature. Grace explained to me that the songs and dialogue we were about to hear are filled with rich stories and edgy humor. We were both saddened that I would probably not be able to catch it, yet I felt I could imagine what it might be like. Canada’s east-coast maritime community is also a boisterous bunch well known for their songs, stories, bravery, humor and love of the drink.

Those not participating in the ritual were eventually asked to leave the pier temporarily for the start of the event. As I milled around up top waiting for things to get started one of the participants approached me. His name was Joe, he was dressed in a pure white hambok and spoke excellent English. Joe radiated a certain energy I find difficult to sum up in words but I will try. Perhaps it could best be described as enthusiasm, positivity, confidence, strength, warmth and honesty all rolled into one. I asked Joe how long he’d been doing this ceremony, he replied “35 years”. I said, “So basically since you were born!” and he responded “No, I’m 55”. Joe swore he wasn’t joking about his age but I still have trouble believing him. Joe escorted me back down the ramp informing me that I was free to stay to take photos of the opening ritual and could come to him anytime during the day if I had questions. (I later asked Joe if he had given me privileged access because he had been informed about my coming to take photos. If I understood him correctly (it was very noisy at the time) the shaman mother sensed a positive energy coming off of me, she somehow knew I was a teacher and teachers are quite highly regarded by shamans so she asked Joe to get me and bring me down. I was flattered.)

The first ritual commenced at 10:30am on the small pier flanked by six weathered fishing boats on the left and right side. It began with traditional music, dance and offerings of food, makgeolli and soju to the spirit world. The song and dance instantly reminded me of Canada’s indigenous people. Follow the link below to a youtube video featuring the Squamish Nation, a tribe near Vancouver BC, performing a Pow Wow in traditional dress and you’ll see and hear striking resemblances (http://goo.gl/YjJpe7) Joe wasn’t surprised at all by my observation, he informed me that the language used to communicate with the spirit world is virtually the same all over the world. It’s a basic rhythmical beat accompanied by repetitive vocals, simplicity is key when speaking to spirits.

From the pier the procession proceeded up the ramp and along the street past a warehouse were the rest of the performers, the most notable of which was the shaman mother, joined the group. A sizeable crowd of around seventy spectators had now formed. Further song, dance and offerings were made at a nondescript location overlooking a few boats on the harbor. The group then moved to a shop so crowded with anchors and the makings thereof it was hard to fathom how anyone could even get in the door to work. A man was honored, perhaps the anchor maker. Then it was onto the fish market and back down to the pier.

It was at this point the giant coolers of makgeolli and water were opened to the public and acorn tofu was distributed. No glass was left empty, if you weren’t feeding yourself someone would feed you. All the while the song, dance and offerings continued, right through lunch which consisted of mulchi bokkeum, ddoek, kimchi, bossam, rice and iced seaweed soup.

As the effects of the makgeolli and soju were nearing their peak so was the event. A long line of visitors queued in front of one the ladies. A 10,000w bill was exchanged in return for her words. The first woman was extremely emotional, sobbing and in tears and was referred to the shaman mother. Most other fortune seekers got a quick quip that resulted in an uproar of laughter from the crowd.

Following the fortune telling was an event that involved passing a large chunk of ddeok from a long piece of white fabric resembling a scarf onto the back of a woman or man. He or she had to catch and cradle it by flooding the back of their shirt up over it. The majority of those who participated were young women. Perhaps they were wishing for a baby in the near future? As the line grew shorter the music grew louder and faster and soon everyone was dancing on the pier in a trance-like state. The energy continued to build and climaxed when one of the lead ladies in a hanbok grabbed the tray with the pig’s head and danced with it on top of her head. The tempo built, the people danced harder and then, for the first time in five hours, the music stopped and applause erupted. It was over.

My experience at Seohaean Baeyeonsingut & Daedonggut will stay with me forever. I may have missed a lot of what was said but I FELT everything. Most of all I felt the generosity and kindness of the performers, spectators and towns people. It started with soju and squid in the morning and carried on all through the day. A total stranger walked me to the bathroom when I asked where it was. An old man smoking a cigarette pointed out the way back to the festival when he thought I was lost. A table of four having an early dinner shared a glass of soju and started hand feeding me BBQ eel, gochujang and onions wrapped in sesame leaves on my way by. I’m truly honored to have been welcomed with such open arms to this event, something I would never have discovered on my own. My sincerest thanks goes out everyone who welcomed me with open arms there that day. See you again next year!

Greg Samborski is a commercial, lifestyle, and portrait photographer. He lives between Vancouver Island, Canada, and Seoul, Korea, and works globally.|ProPhoto Photo Website