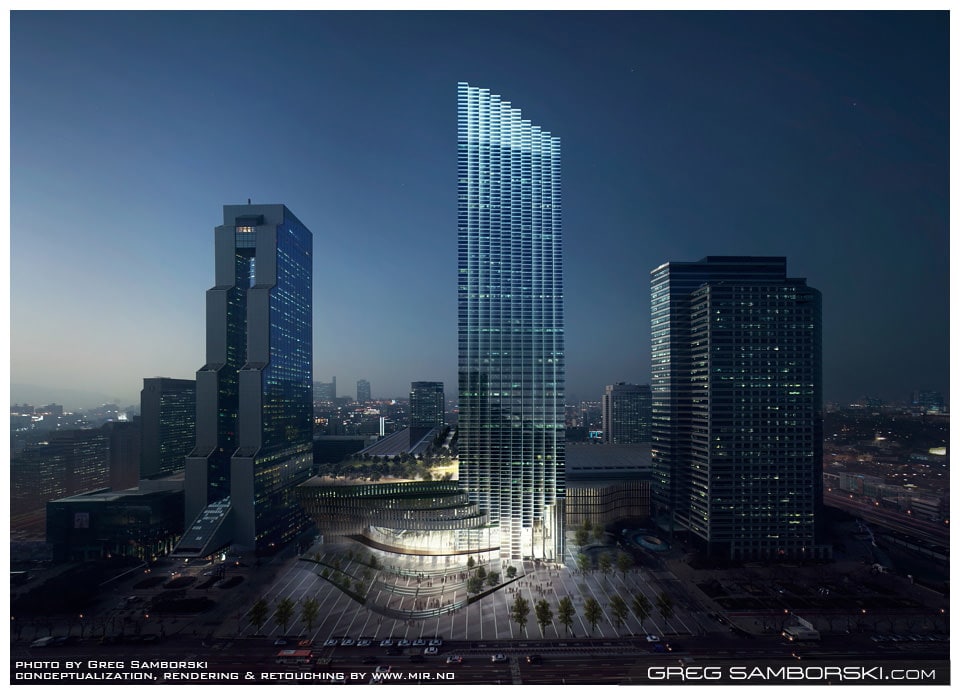 COEX, Gangnam: It was pretty clear to MIR, a Norwegian company specializing in architectural visualizations, that I was no architectural photographer.  My portfolio consisted of mostly engagements at the time yet for some reason they trusted me enough to go out and photograph images of the COEX site in Seoul for a project they were working on in December of 2012.  It’s kind of like asking chef trained in french cuisine to cook Chinese food for you, yes the fundamentals of cooking are universal but it’s a whole different flavour.  That said, MIR did provide me with pretty solid recipe cards. 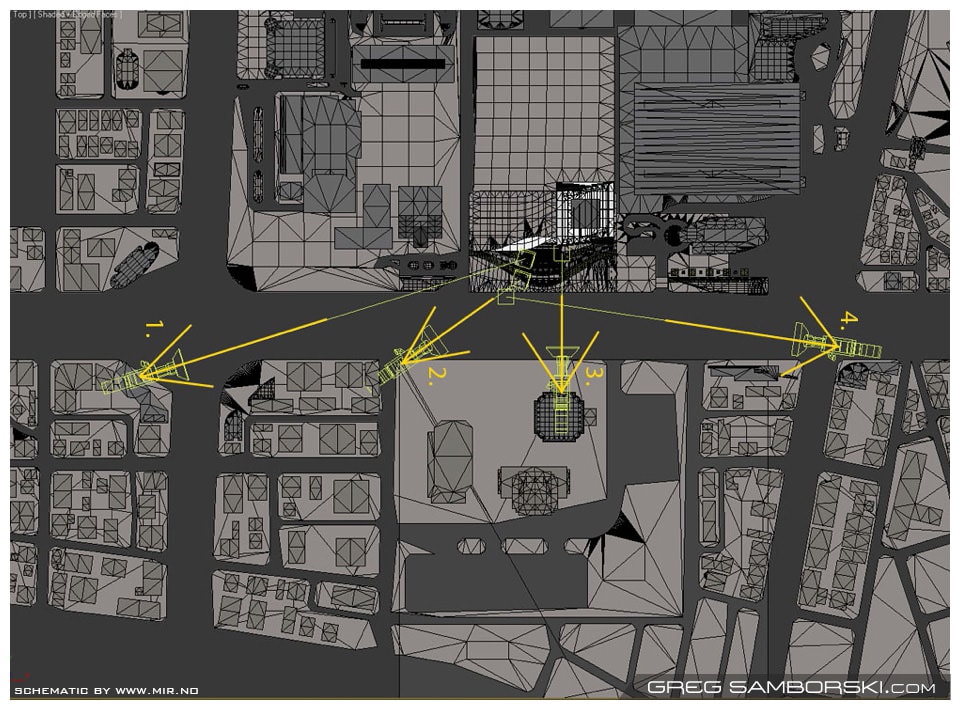 3D birds-eye renderings of COEX / Gangnam marking my shooting positions. (Korean Homeland Security  – That is photo “shooting” for the record)

Never before had I been given such clear direction by a client.  It all felt a little 007-ish.  MIR sent me 3D renderings of the COEX/Gangnam area that looked as though they were pulled from a top secret spy satellite.  Everything from the vantage point to time of day and focal length were laid out on the schematics.  In addition to shooting from the street level locations I was to try and gain roof top access to the Park Hyatt Hotel and KEPCO (Korea Electronic Power Corporation).  My mission and objectives were crystal clear.  It should have been easy right?  Not so. 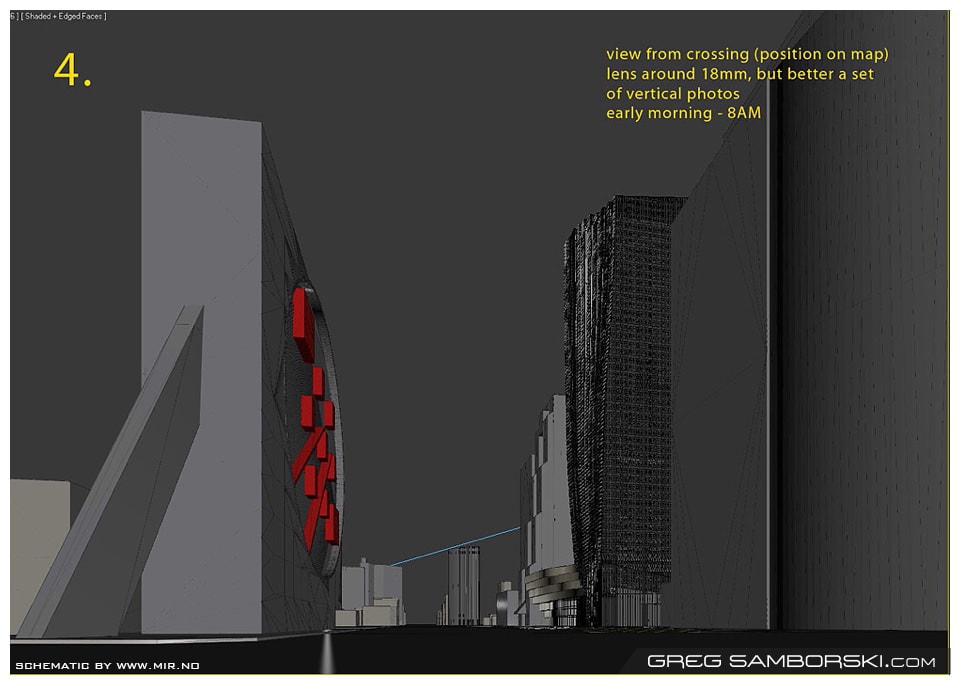 My first setup of the day looking south past the iPark Building on the left and COEX on the right.

This was to be the first shot of the day.  I arrived on location nice and early and was immediately stuck by the fact that no such vantage point exists at around 18mm, even if one could could setup in the middle of the intersection during rush-hour.  Furthermore, the schematics didn’t account for any of the usual obstructions and clutter like cars, signs, trees, lamp posts, flags, police officers in bright green vests and all thousands of other little distractions one faces in the streets of Seoul.  The photos coming out of my camera looked nowhere near as cool as the renderings.  Still, I had a mission and the objectives needed to be adhered to.  After I felt I achieved the closest possible mach to the schematics I then tried a few variations, sometimes something as minor as a change in focal length, other times I changed my location all together. 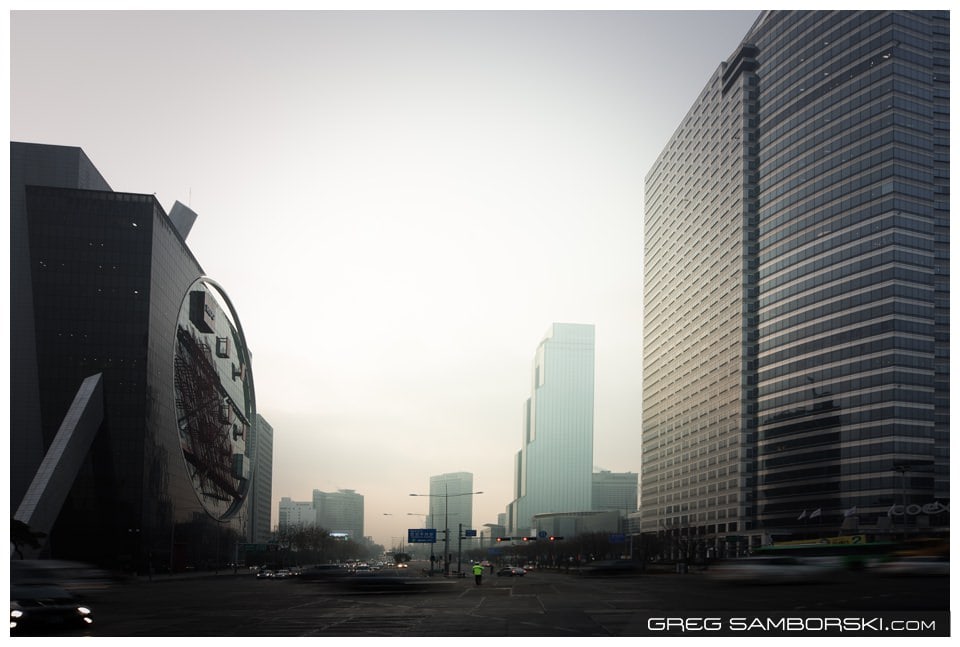 My photo of COEX adjusted in LightRoom to resemble MIR’s retouched image. 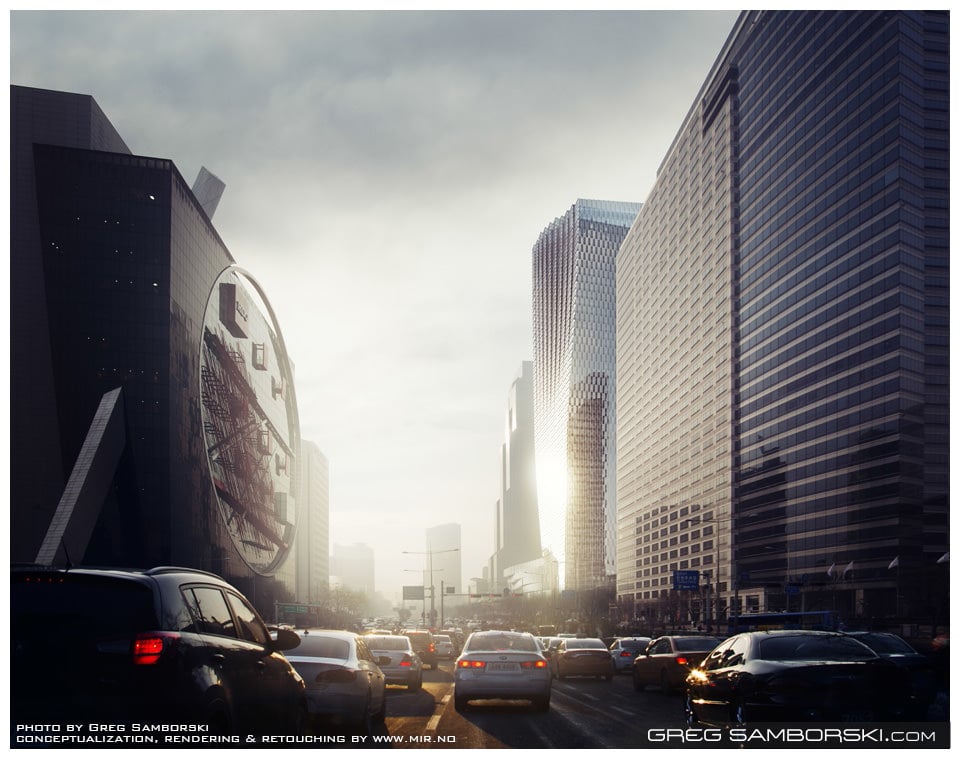 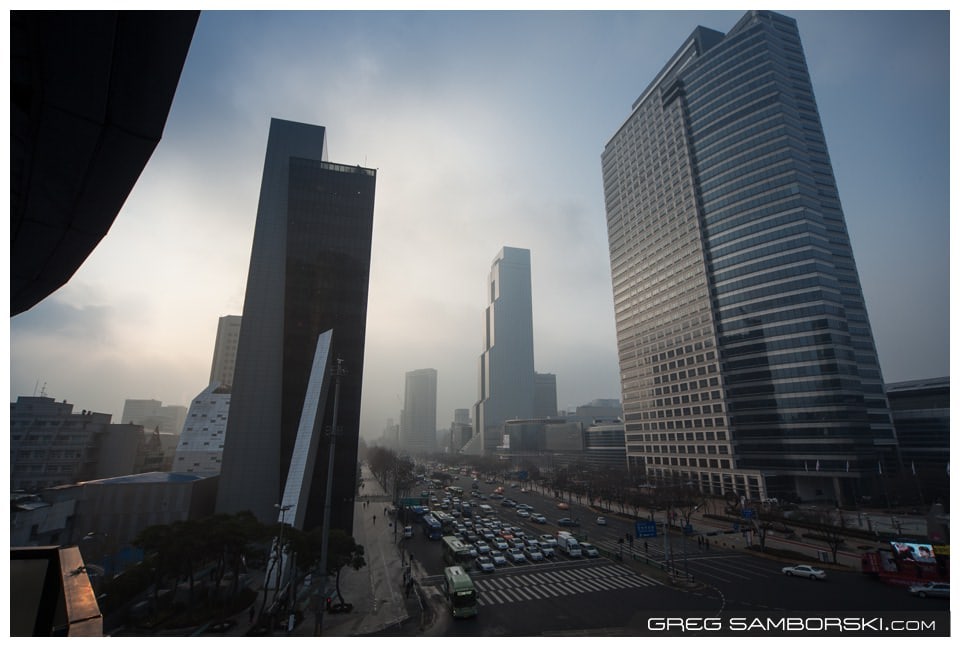 An alternate view of COEX I got by visiting a random office and asking if I could use their veranda.  Did my own editing in LightRoom.

Shot number two wouldn’t happen until after lunch so I decided to use the free time to try and negotiate access to the KEPCO and Park Hyatt rooftops.  I say negotiate because in my experience Korean businesses are very protective of their rooftops.  It’s one of those things where you are better off begging forgiveness than asking permission.  That approach really only works with residential apartments and smaller corperate buildings though, anything as big as Park Hyatt or as government as KEPCO is going to be locked down and tightly guarded.  My intention was to convince those in charge of the importance of this project and persuade them to grant me rooftop access in return for some of the photos I would capture. 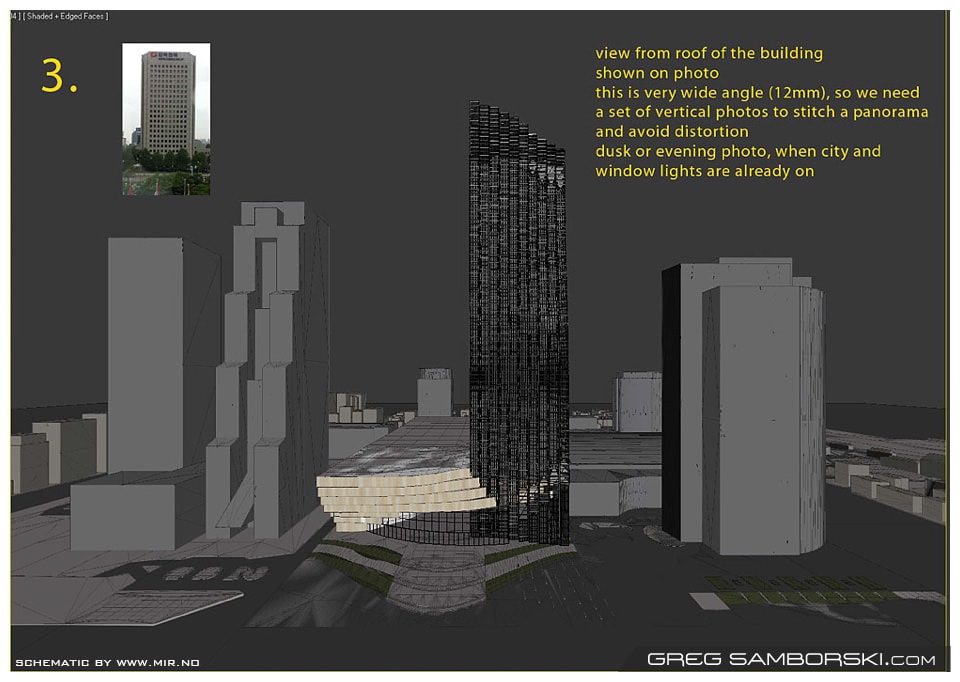 I showed up to KEPCO at 10:50 and after an hour of negotiations, and numerous phone calls to my Korean wife they gave me a “now or never” ultimatum.  I figured now, at noon, was better than never.  On the ride up, I met a foreigner in the lift and asked him if he knew anyone in Human resources who spoke English.  I got a name, and retuned at 1pm to see if she could help me organize things for an evening shoot.  She seemed reluctant to come meet an unannounced stranger who had acquired her phone number.  Eventually she did come to the lobby and after some discussions with security told me there was no way I could gain rooftop access again.  At least I had gotten my afternoon shot. 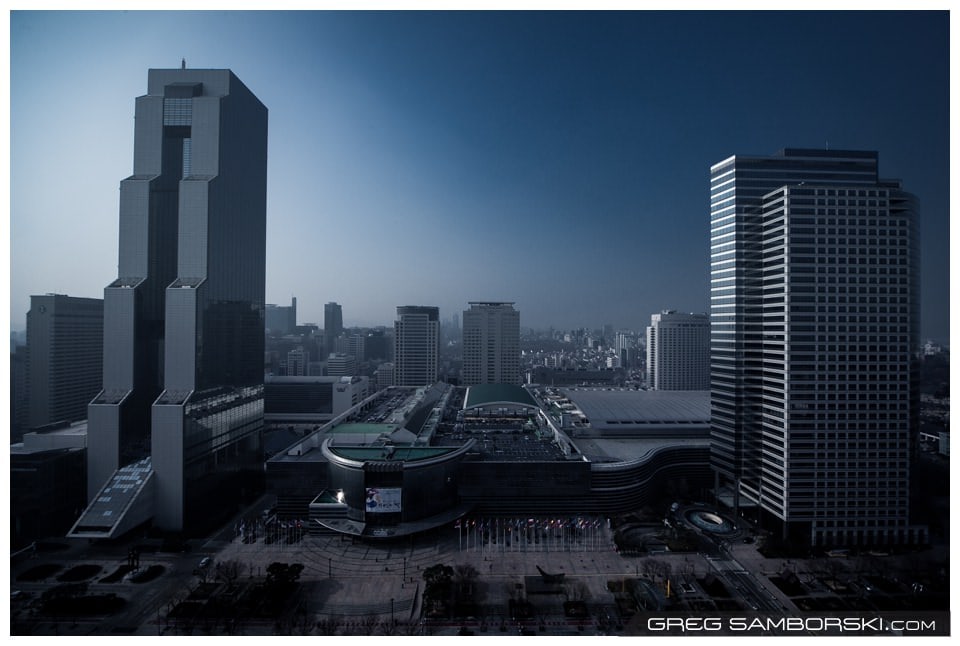 My photo of COEX adjusted in LightRoom to resemble MIR’s retouched image.

MIR’s architectural visualization for COEX in Seoul at night.

The street level shots near the Trade Tower would also proved to be more difficult than anticipated.  Again a ton of obstructions were present, namely the strip of trees and lights down the middle of the road and plethora of multi coloured police busses that would line the road ALL DAY.  So after getting the shot as directed I found a smaller building I nearby I could climb and use for an elevated shot in case MIR preferred it. 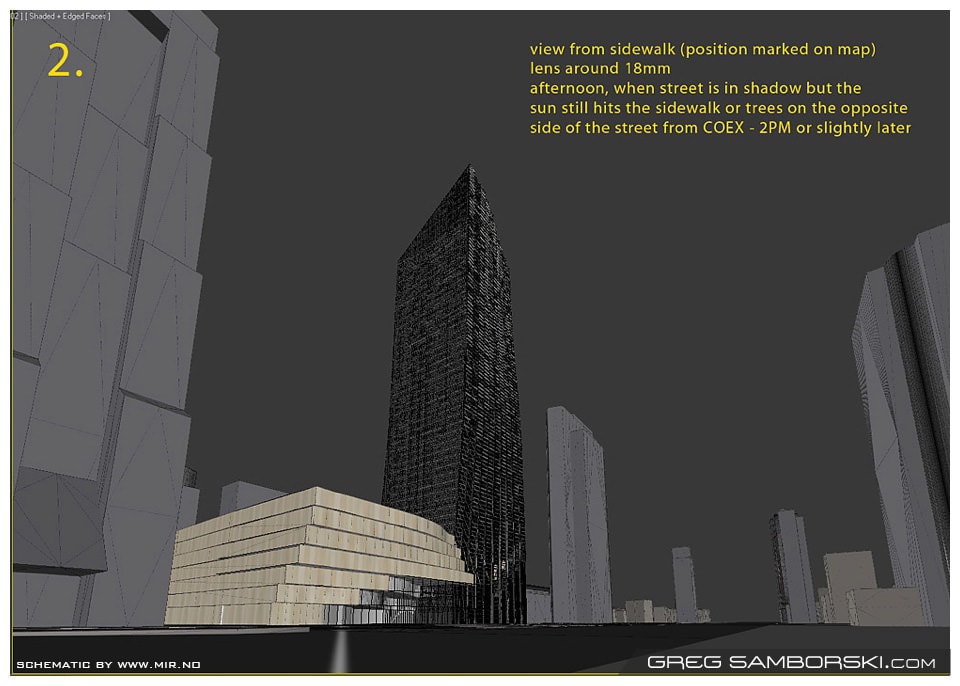 Simulated view of proposed COEX architecture from across the street. 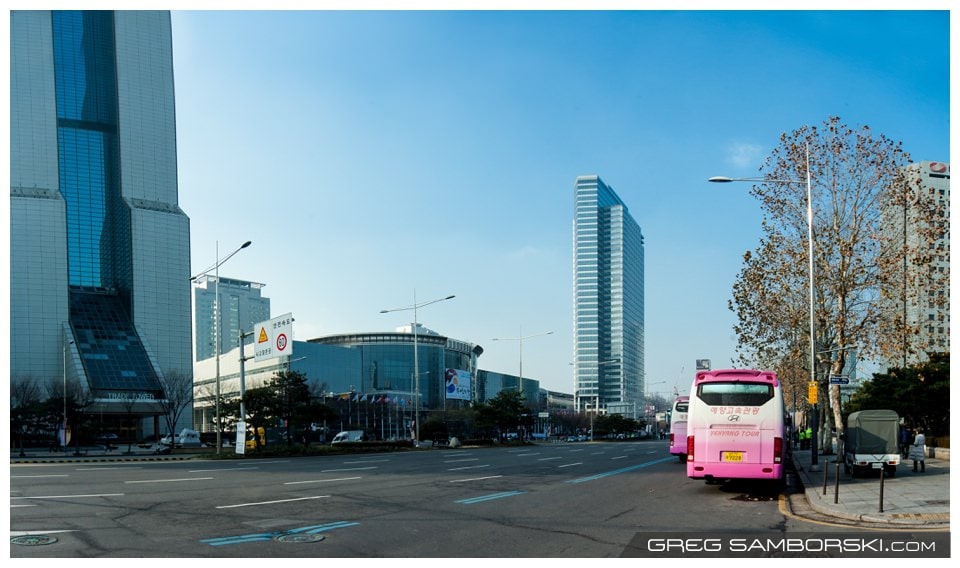 My photo of COEX adjusted in LightRoom to resemble MIR’s retouched image. Trade Tower on the left. 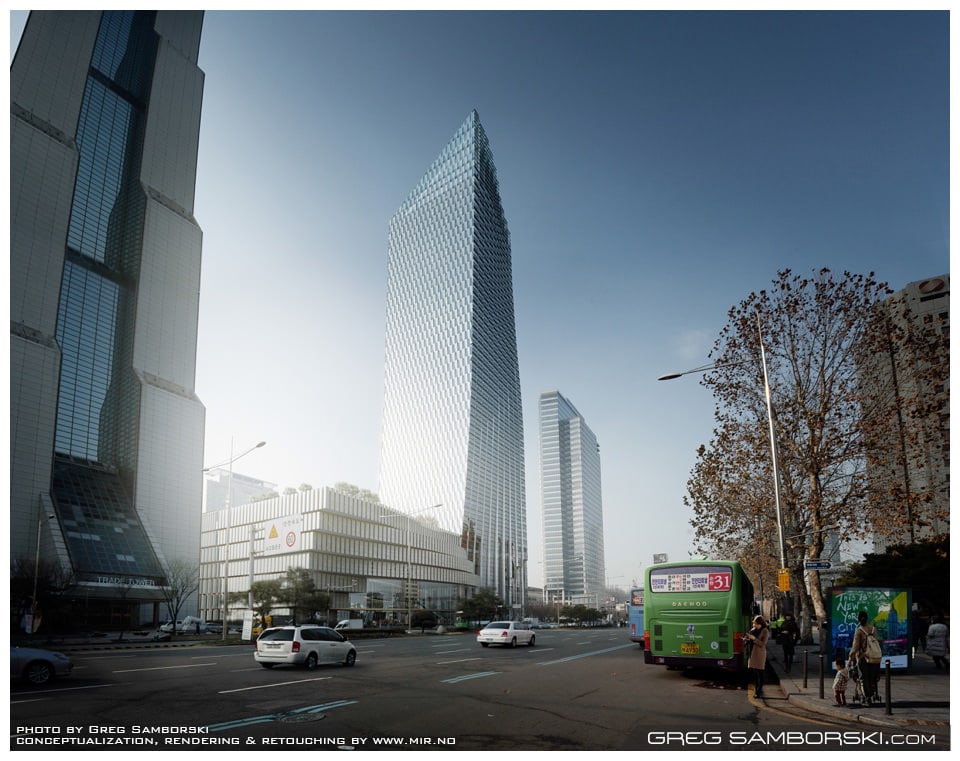 MIR’s architectural visualization for COEX in Seoul.  Trade Tower on the left. 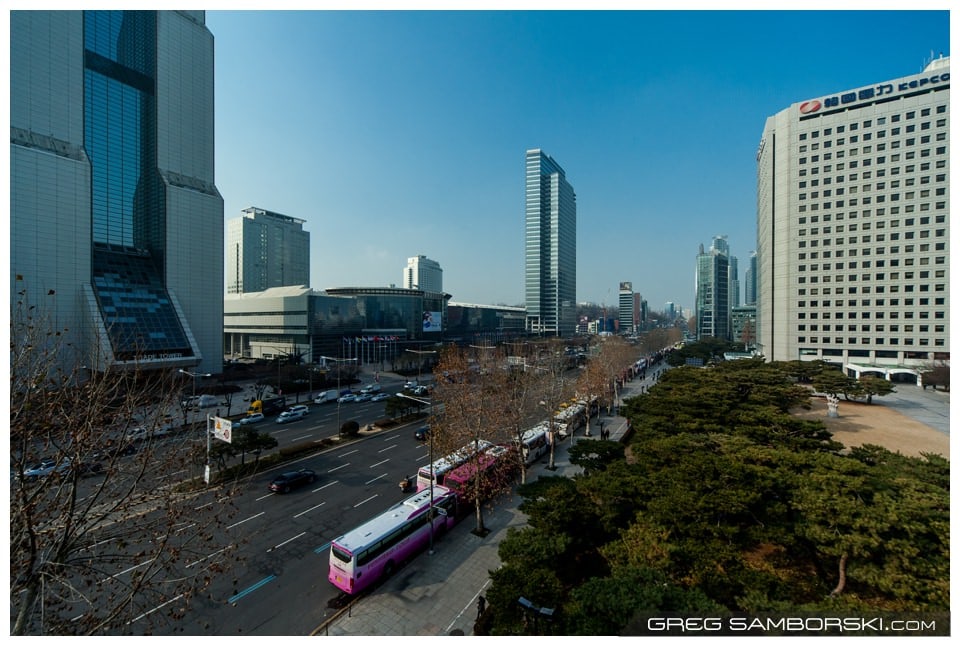 Alternate view of COEX taken from a nearby office building stairwell with sliding windows.

My meeting with the Park Hyatt guest services manager at noon was even less successful than the KEPCO meeting.  She said unless I’m a government inspector or military assigned to the rooftop they can’t open it up to me for any reason.  I didn’t give up though.  I met with the marketing team manager over a drink in the Hyatt Sky Lounge.  She liked the idea of getting images but lacked any authority to unlock the door to the rooftop.  She suggested I shot through the window — a good suggestion considering it was my only other option. 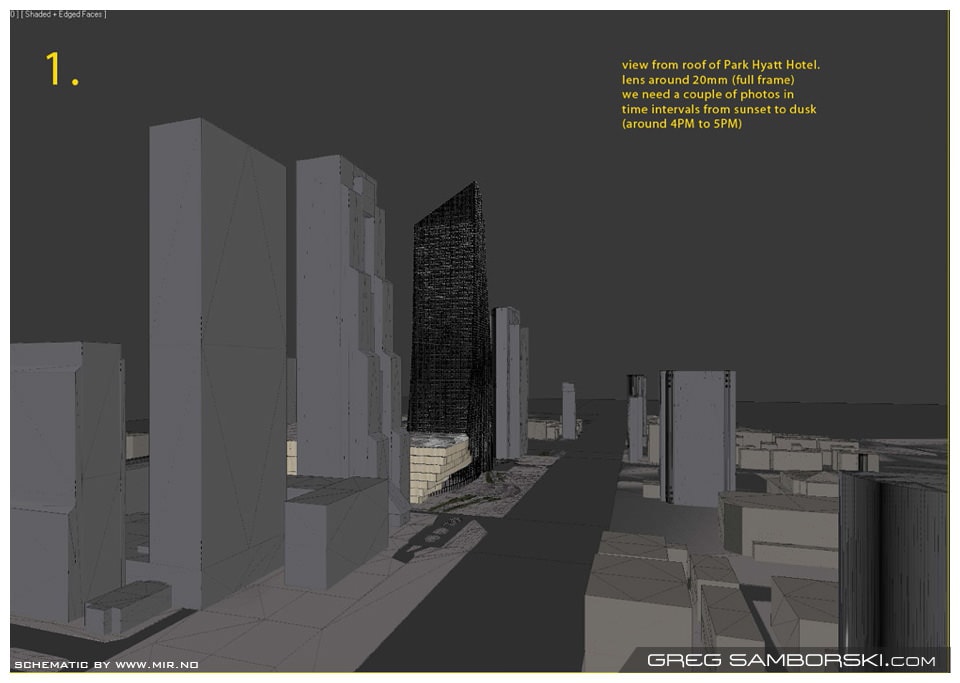 At 4:00pm I setup my gear for the shot.  As the sun set I realized I faced a problem I could not control, reflections.  As the sky darkened the reflections of the indoor lighting brightened.  None of the staff I spoke with could turn off the centrally controlled wall lighting and I had nothing big enough to black out the entire wall, I would have needed ten square meters of black fabric.  Again I worked with what I had and then submitted my variations along with the requested shot. 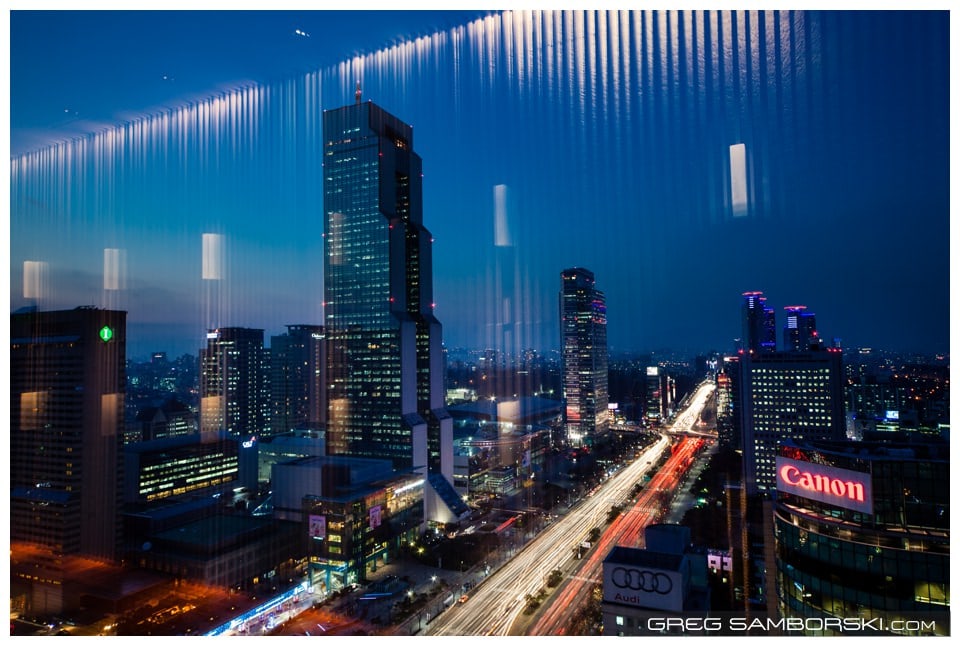 Photo of COEX Trade Tower at night from the Grand Hyatt with interior wall lighting reflections on glass.

In the end I loved every moment of shooting for MIR.  It was such a novelty working with subjects I didn’t need to pose, comfort or even talk to for a change!  Instead I popped in my earphones, threw on my favorite progressive house mix and emerged myself into the world of architectural photography.  With schematics for a secret project in my overcoat, I darted from rooftop to rooftop at dawn and dusk, meeting with government agents and marketing executives at swanky hotel sky lounges in between.  To finish off the night I found my way onto the rooftop of a building very close to the Hyatt.  There I setup on the ledge and got a few extra images for my client and myself.  I went home buzzing. 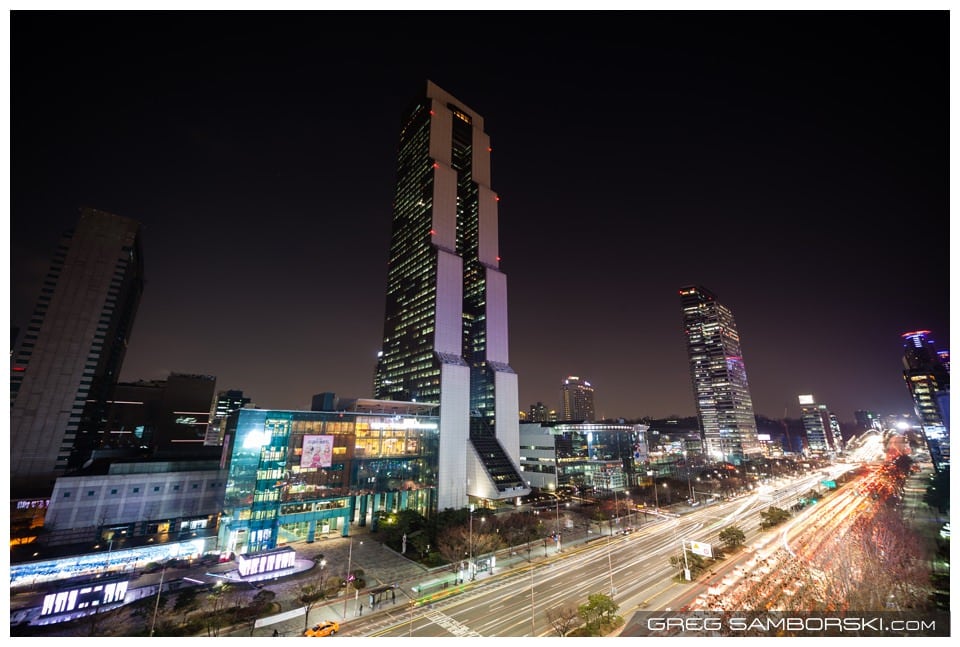 Alternate view of COEX Trade Tower at night from a rooftop.

Yes, the mission had some setbacks but I adapted and did the best job I could.  MIR responded with the following after I delivered the photos, “Thank you very much for the photos, they look very very good, you did a great job!  We appreciate all the effort you put into arranging permissions and taking photos from so many different places.”  Considering it was my first time working as an architectural photographer I was very pleased with the response.

It took over a year before MIR released the rendered images (hence my blogging about it just now).  I am absolutely blown away by their retouching and rendering skills.  They took my daylight shot from the KEPCO building and MADE IT INTO NIGHT!  They DREW IN every office light!  MIR has a great crew and I hope to work for them again on their next Korean project. 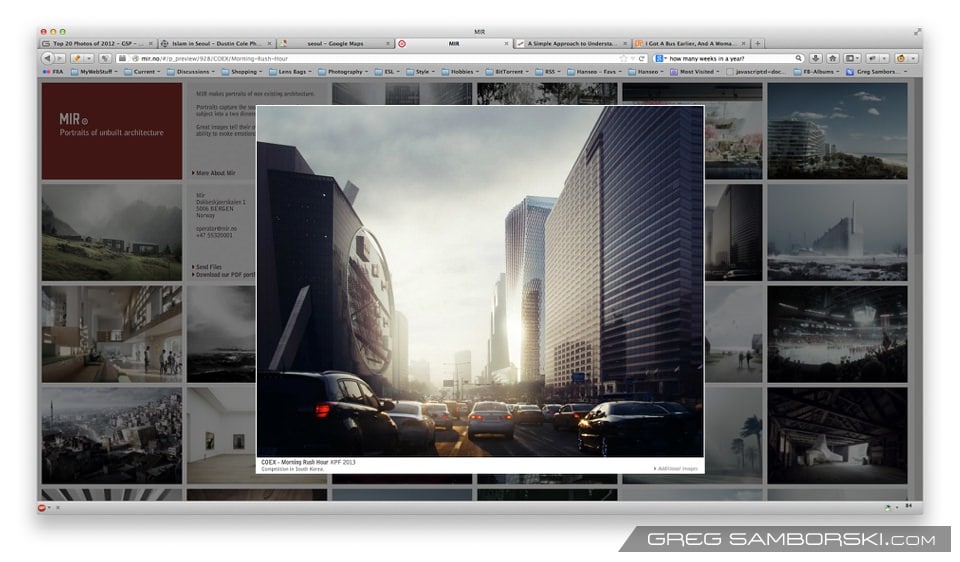 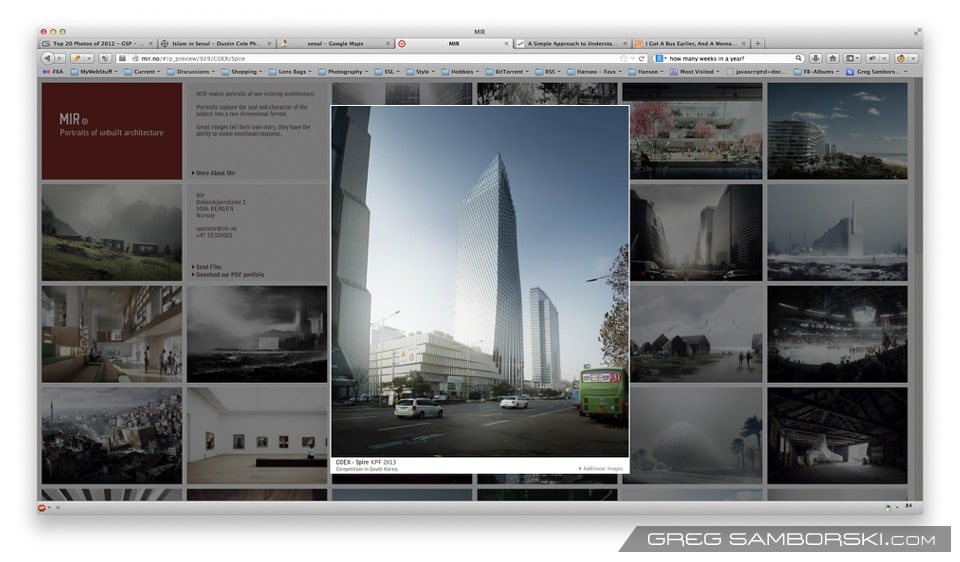 Greg Samborski is a commercial, lifestyle, and portrait photographer. He lives between Vancouver Island, Canada, and Seoul, Korea, and works globally.|ProPhoto Photography Website